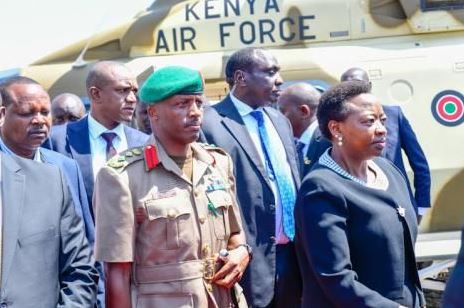 President William Ruto has made new changes to his security details by appointing Colonel Fabian Lengusuranga as his Aide-De-Camp.

He will be taking over from Brigadier Timothy Lekolool served under President Uhuru Kenyatta until his retirement.

However, Brigadier Lekolool is still part of Ruto’s security detail as he was seen behind Ruto though wearing a suit.

At one instant, he was seen apparently guiding Lengusuranga in performing his role.. The new ADC is deputised by Lt. Col. Damaris Agnetta also from the Kenya Army.

She takes over from Racheal Nduta Kamui who has been promoted to a full Colonel and deployed to the Department of Defence headquarters.

Col. Lengusuranga was commissioned in 1999. He is a seasoned and decorated military officer serving as a senior Special Forces branch commander.

Lt. Col. Damaris Agnetta was commissioned in 2003 and has been serving as an Artillery officer. She’s also served in the UN Observer Mission.